I was kindly asked by Harrington Park Press, in New York, to review an academic publication that is being released this week (on Tuesday 2nd September 2014).  They sent me a copy of the book, pre-release, in late July and it's been my bedtime reading for a number of weeks.  I have written an honest and factual review which is independent and in no way influenced by the publisher or authors of the book. 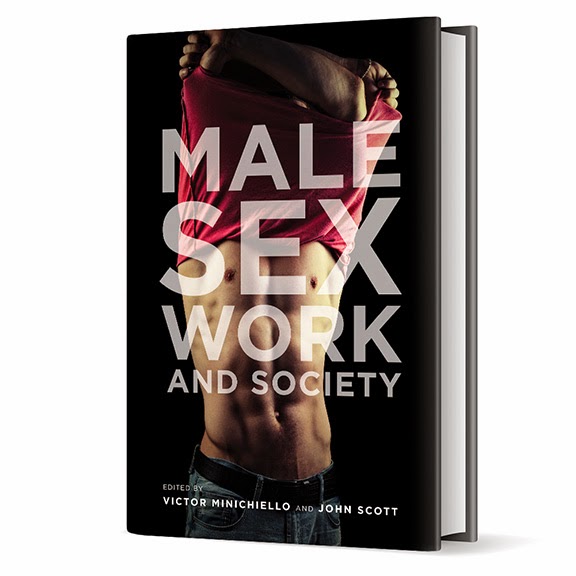 Within research and the current debate about sex work , there exists a gap in our knowledge and understanding of the male sex worker as a distinct group. The feminist ideology that dominates so much of the sex work discourse in the west, chooses to present sex work as being only about women selling sex to men. If and when acknowledged, male and indeed trans sex workers, are recognised only within this politically motivated narrative of female submission to dominant male sexual desire. The complex and varied experiences within the male sex work narrative have too often been reduced to a caricature of a feminised boy, to assimilate easily within this politicised perspective of sex work. The arrival of “Male Sex Work And Society” therefore is a welcome addition to a growing academic and political awakening to the male sex worker as being a distinctive subject with a history and culture deserving of recognition.

The book is a collection of research by noted academics and specialists in sexual health and LGBT studies. Despite being a substantial book, it is easily accessible and each chapter carries its own section of references. The topics are wide ranging, from a history of male sex work, the influence of culture on how male sex work is engaged, perceived and legislated to how sex workers and clients interact. Continents and countries are dealt with individually, giving a perspective on male sex work in the United States, Africa, Russia, Western Europe, China and so forth. Stigma, political and religious prejudice and their consequences are discussed.

The problems faced by male sex workers especially in parts of Africa and Russia, where a growing intolerance and violence toward the LGBT community has created an especially hostile environment, is engaged at length, in the book. Interviews with sex workers and their clients are included too, which gives an authenticity to the research which very often is missing within academic works. How sex workers feel about themselves, how they understand and relate to their work, their aspirations and fears are discussed and referenced extensively. Clients are also interviewed and it is interesting to note the cultural differences, but also the similarities.

A chapter on male sex work and male sexual identity in Latin America was especially fascinating. Research done by Victor Munichello, Tinashe Dune, Carlos Disogra and Rodrigo Marino in chapter 15, “Male Sex Work From A Latin American Perspective” discusses the influence of Catholicism and the family, in defining male sexual identity and how male sex workers accommodate and work within those boundaries. Another chapter on “Male Sex Work In China” by Travis S K Kong, in his research into the “Money Boy,” again reflects the influence of culture and politics on how male sex workers identify and work.

I especially enjoyed the fact that research concentrated on sex work as a business with reference being made to a variety of marketing strategies used by male sex workers. Inevitably awareness and reality of class within societies was also reflected within the sex work dichotomy, emphasising the influence that education and social background has helped in optimising earning potential.

The male sex worker in literature and in cinema has its own chapter and within a western context, the development of the male sex worker is referenced and traced within a context of a growing acceptance of sexual diversity within greater society. Sexual health is naturally discussed extensively, referencing the negative affects of politics and culture, of criminalisation, on accessing health services and for health specialists to monitor sexual health among sex workers.

The importance of accessing and educating sex workers to help stop the spread of HIV is discussed. Criminalisation of sex workers especially affects the sexual health and awareness of those sex workers with social disadvantages, be that addiction or lack of education, or who are migrant and who may not speak the host countrys language and are quite often illegal. Those sex workers are the most at risk of infection.

I concur with the general consensus in the book that sexual health and social support for male sex workers in general is secondary to that on offer for female sex workers. This point in conclusion brings me to my only criticism. As a more mature sex worker I noted little reference to older male sex workers, to the wide age age range that exists within male sex work. The emphasis in the book concurred with the common perception that male sex work is predominately young boys and men. From my perspective, advertising extensively throughout the UK and beyond, this is not the case. I also would have liked to have seen more references to men selling sex to women. This is an area of sex work which is beginning to be recognised and researched. I have a feeling that society may be in for a quite a surprise at the findings.

The book is available for purchase at Amazon UK and is published by Harrington Park Press.  I would personally like to thank the publishers of the book for recognising my own blog and contribution to the sex industry and for asking me for my unbiased opinion on it's content.
Posted by Steve Gay Escort at 12:09

Steve Gay Escort
Newcastle Upon Tyne, Tyne and Wear, United Kingdom
I am a gay male escort, Mid 30's sane and sorted in Newcastle Upon Tyne. Call me on 07854 146783 8am to 10pm. Website is www.steveescort.co.uk